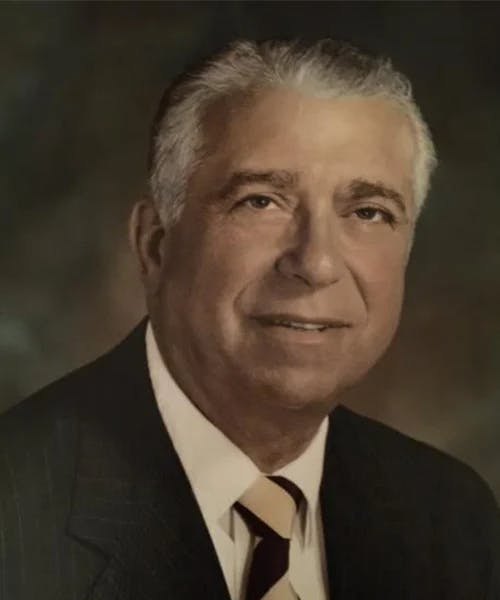 Mayor Shebell was born the son of Italian immigrant parents on the Westside of Asbury Park on May 9, 1905. He had three brothers and a sister. He graduated from the old Asbury Park High School in 1923, when it was located on Bond Street. He was admitted to Georgetown University and after one year of college entered Georgetown Law School. While working and with the financial support of his four siblings, he graduated sixth out of 150 law students in 1926. He was the Editor of the Georgetown Law Journal and published several articles.

In May 1927 the Asbury Park Press headline announced that Shebell was the first to pass the Bar from the City’s Westside. On August 10, 1927 the Press announced he was the first of Italian extraction from the County to be sworn in as an attorney.

He entered the private practice of law with the prestigious Asbury Park firm of Duran, Ivins & Carton. In 1929 he was chosen to serve as Assistant Police Court Judge of the City. He later started his own private law firm. In 1945 he became the City Magistrate where he served until 1949.

Shebell was elected to the City Council in 1949 and served as a Council Member until 1957 when he was elected Mayor. He held that post until 1965. During his tenure as Mayor his administration built a new boardwalk and four new Pavilions, among them the Fifth Avenue Bandstand and restaurant. He was elected President of the New Jersey Conference of Mayors. In 1961 Asbury Park was named one of the eleven All-American Cities by the National Municipal League. He also served as President of the Monmouth Bar Association from 1962 to 1963.

The Asbury Park Press, at the time of his passing July 1986, stated "Shebell, the son of Italian immigrant parents, was the local boy who made good-professionally and politically . . .whose leadership as Mayor produced some of Asbury Park’s most fruitful years and whose 52 year maarriage to Mary Palermo produced four children, including two judges."